Easter saw Nic and myself off to Kinlochleven to work again with Giggleswick School’s CCF. The week just happened to coincide with some of the best Easter weather that Scotland has to offer. Clear skies, light winds and enough snow on the hills to increase the beauty. I worked with a number of groups during the week. initially with the Gold Training, we took them for a mountain day over the Mamores. The views from the ridge and summit of Sgurr an Iubhair were magnificent. There was enough snow the other side to have a play and a long glissade to below the col was enjoyed by all. 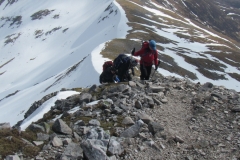 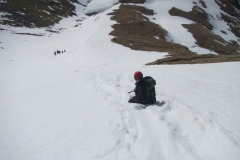 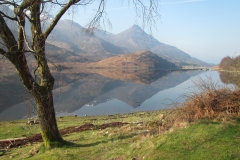 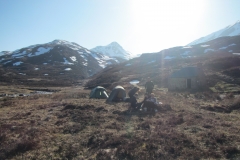 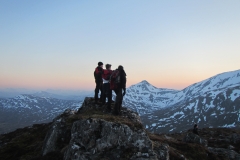 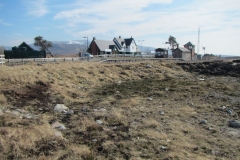 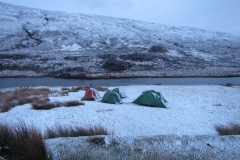 The three day expeditions took place in the usual areas between the Grey Corries and Ben Alder Forest. The first night, we took a Silver Training group to the summit of Sgurr Innse to see the sunset. Fortunately, we left before complete darkness as the descent was interesting. I left this group to go to Corrour Station and meet up with various stragglers arriving on the train and also the gold groups. From there it was back over the top to my favourite bothy ay Loch Chiorain and to meet up with Nic’s and Nigel Saunders’ groups.The final morning, the weather had finally changed and we woke to a snowy scene.